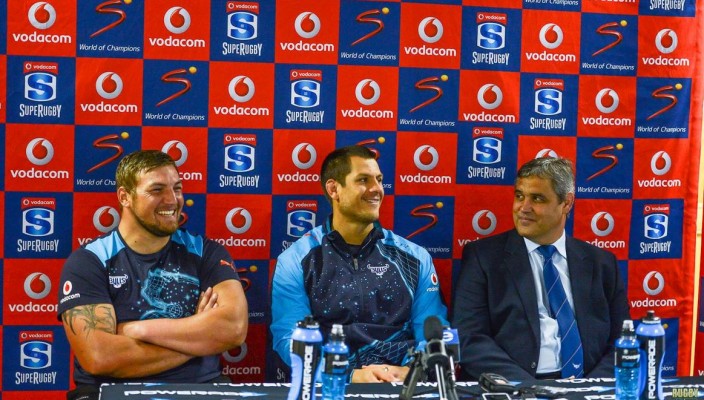 Players and fans at the Coca-Cola Under-13 Craven Week were treated to a special visit on Thursday by Vodacom Bulls Super Rugby coach Frans Ludeke, Springboks Dewald Potgieter and Dean Greyling, and Jono Ross at Warmbad Hoȅrskool in a strong show of support for the tournament.

In a fantastic gesture Ludeke and the three players spent their off day ahead of Saturday’s Super Rugby clash against the Southern Kings at Loftus Versfeld watching SA’s top under-13 players and meeting supporters. This included the tense Gauteng derby between the Blue Bulls and Golden Lions.

To their delight the Pretoria team defeated the Lions 24-0 in one of the top clashes of the day, but Ludeke said he was impressed with the high quality of rugby in general at the tournament.

“It is always fantastic to come to the Coca-Cola Craven Week because apart from showing support, it brings back fond memories of the days when I played in the tournament,” said Ludeke. “As a senior coach it gives me great pleasure to see the passion and commitment these players show and I have no doubt that rugby in SA is in a healthy state. Two factors that stood out for me this year were how much bigger the players were and the high skills levels displayed. Hopefully some of these players will become Springboks one day.”

The day’s play was again dominated by the Blue Bulls, Western Province and the Pumas who extend their unbeaten runs in the tournament to three matches.

The Pretoria-based team was particularly strong in the contact and they did well to keep the Lions clear of their tryline. They also made the most of their try-scoring chances, which earned them their first bonus-point win of the tournament.

In the other popular match, Western Province proved too strong for their sister union, Boland, and registered a 20-12 victory thanks to their powerful pack and clever tactics to pin Boland in their own half. The Wellington side bounced back from a 10-5 deficit shortly after the break as they scored their second try to take a 12-10 lead. But Province retaliated by retaining possession for long periods. The reward was two second-half tries, which took their tally for the match to four.

The Pumas also showed their class as they thumped South Western Districts 20-7, while Eastern Province and Namibia finally ended their drought by registering their first victories in the tournament.

In a drastic change of fortunes Eastern Province produced a dominant display against KwaZulu-Natal, which featured a strong second half performance, while Namibia found their rhythm against Zimbabwe with the biggest switch in their game being their ability to capitalise on their try-scoring chances – the lack of which came at a high price in their first two matches.