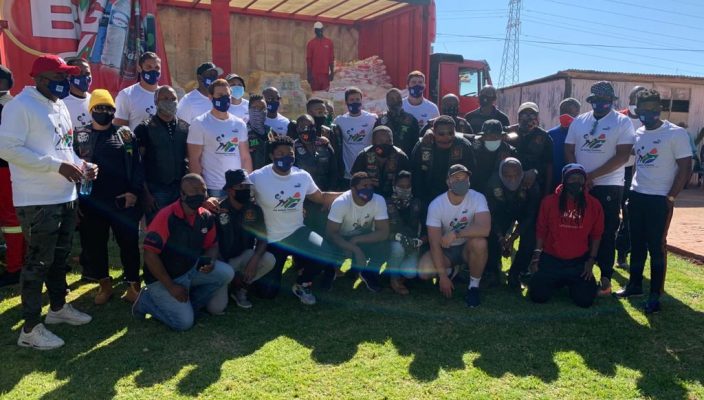 Vodacom Bulls prop Lizo Gqoboka knows exactly what it’s like to be so hungry for days that you cannot sleep, think or even train. He also knows that sense of relief when somebody knocks on your door and has a meal for you.

So on Monday 1 June, the Lizo Gqoboka Foundation teamed up with Vodacom, the Vodacom Bulls and Big Save in a massive food parcel drive for needy charities and homes throughout Tshwane who are amongst the most vulnerable and hardest hit during the COVID-19 pandemic.

The group handed out hundreds of food parcels that were delivered to the Kingdom of Life Centre, the Bophirima Elderly Home, Youth for Survival and the Pheli Ryders Motorcycle Club in Atteridgeville, Mamelodi and Saulsville, and from where they will go towards needy families in those areas.

“On behalf of Bophirima and the others, I want to thank all of those that made this day a success. Please continue making a difference in people’s lives, and may God bless you all,” said Martha Hlongwane from the Bophirima Elderly Home.

Gqoboka said his personal experience of hunger is what inspired him to drive this project. “I believe nobody should worry where their next meal will come from. I’ve been in that position where I’ve given up on food that day, and someone helped me. I know how it feels. Hunger is now. You cannot postpone hunger. You can’t think of anything else but food. I’m so grateful for this support from Vodacom, the Vodacom Bulls and Big Save. Now we can feed about 350 families for three weeks.

“In one home there is a 78-year-old lady who looks after about 50 children who have been abused and abandoned. Now they will have food for a month. And the Pheli Ryders in Atteridgeville is a group of bikers who have been helping their community, but who just ran out of resources. I’m so pleased we can help them. When we started this initiative, we wanted to work with people who had a heart for others in their community. Reliable people who we knew would make sure the help goes to where it is most needed.”

Gqoboka said he will also be making personal deliveries to homes in Diepsloot, Alexandra, Thembisa, Benoni and even as far as Soweto.

Gqoboka had key Vodacom Bulls players joining him for the food parcel drops on Monday including, to name a few, Morne Steyn, Abongile Nonkontwana, Ivan van Zyl and Juandre Kruger, as well as new Vodacom Bulls CEO Edgar Rathbone, who was more than willing to roll up his sleeves and help out on his first day on the job.

“It’s such a privilege knowing that I’m coming into a Vodacom Bulls family that puts the needs of others ahead of themselves. The Lizo Gqoboka Foundation is just one example of what makes this #BullsFamily special. It was a humbling experience to be on the front lines and assist in making a difference. I’d like to thank all those that assisted today, especially our title sponsor Vodacom, the players, the social influencers, Big Save outlets, and most importantly the people in our community that work tirelessly behind the scenes and often without anybody seeing the outstanding work they do,” said Rathbone.

Gqoboka says he personally hand-picked the people he wanted involved in this project.

“I wanted people who have a heart for helping, and who weren’t just feeling like they were making an appearance. You know, before I came to the Vodacom Bulls I’d always heard about this #BullsFamily. Every team talks about being a family, but you don’t always experience that. But at the Vodacom Bulls and with our main sponsor Vodacom, they live that. They really care and go the extra mile to help and inspire others.

“There is a Xhosa proverb that says a person is a person through other people. To show such selflessness and Ubuntu is the highest honour for me to work for a team like the Vodacom Bulls.”