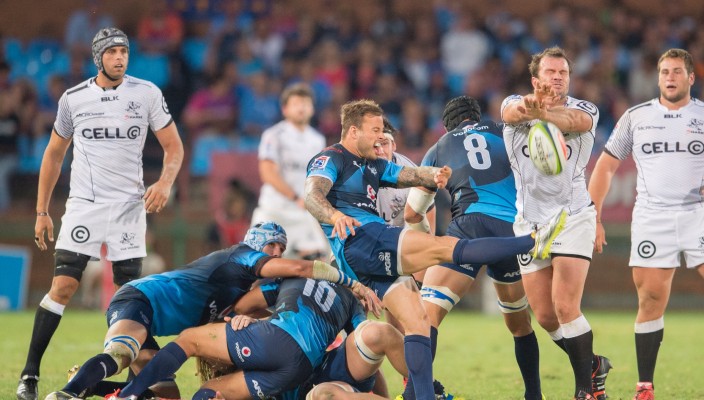 Vodacom Bulls team to take on the Crusaders at Loftus

Mar 26 • General News, Super Rugby • 3405 Views • No Comments on Vodacom Bulls team to take on the Crusaders at Loftus

Vodacom Bulls coach Frans Ludeke restored props Morné Mellett and Trevor Nyakane to the starting line-up for their Vodacom Super Rugby match against the Crusaders at Loftus Versfeld on Saturday.
Both props played off the bench in last weekend’s win against the Force and swop places with Dean Greyling and Marcel van der Merwe in two of the four changes to the pack. In the other changes to the pack and team, Victor Matfield returns to the number five lock position, swopping places with Grant Hattingh, who returns to his regular role as impact player.
Lappies Labuschagne also did not recover from a chest injury sustained against the Force and will sit out. He will be replaced by Arno Botha, who moves up from the bench. Hanro Liebenberg takes over from Botha on the bench.
Ludeke highlighted the positives from the close win over the Force, but also lauded the momentum the visiting Kiwis picked up in recent wins over the Emirates Lions and Toyota Cheetahs.
“We did a lot of things well against the Force, but our execution and defence were lacking. We failed to deliver the knock-out punch when they had 13 men on the field. It is a mindset as well, but few challenges are greater than beating the Crusaders, so I am pretty sure the guys will be up for it. It certainly showed in this week’s training.”
Vodacom Bulls captain Pierre Spies agrees with the coach.
“We did some good things, but also played poorly at times and that nearly cost us the match. It is just not good enough at this level. We need to show we are the championship side we believe we are. Hopefully we will have the crowd support this week. This Crusaders team is a good one, but this is our turf and we need to defend it,” Spies said.
“We have lost twice at home and we cannot allow it to happen again. I think we have turned the corner and is keen to lead the guys onto the field.”
The team (with number of Super caps) is: Jesse Kriel (6), Francois Hougaard (77), JJ Engelbrecht (54), Jan Serfontein (33), Bjorn Basson (76), Handré Pollard (18), Rudy Paige (12), Pierre Spies (c, 108), Arno Botha (24), Deon Stegmann (84), Victor Matfield (143), Jacques du Plessis (20), Trevor Nyakane (47), Adriaan Strauss (110), Morné Mellett (29). Replacements: Jaco Visagie (0), Dean Greyling (58), Marcel van der Merwe (22), Grant Hattingh (39), Hanro Liebenberg (1), Piet van Zyl (48), Tian Schoeman (1), Jurgen Visser (27).

BullsCrusadersSuperugbyVodacom Bulls team to take on the Crusaders at Loftus