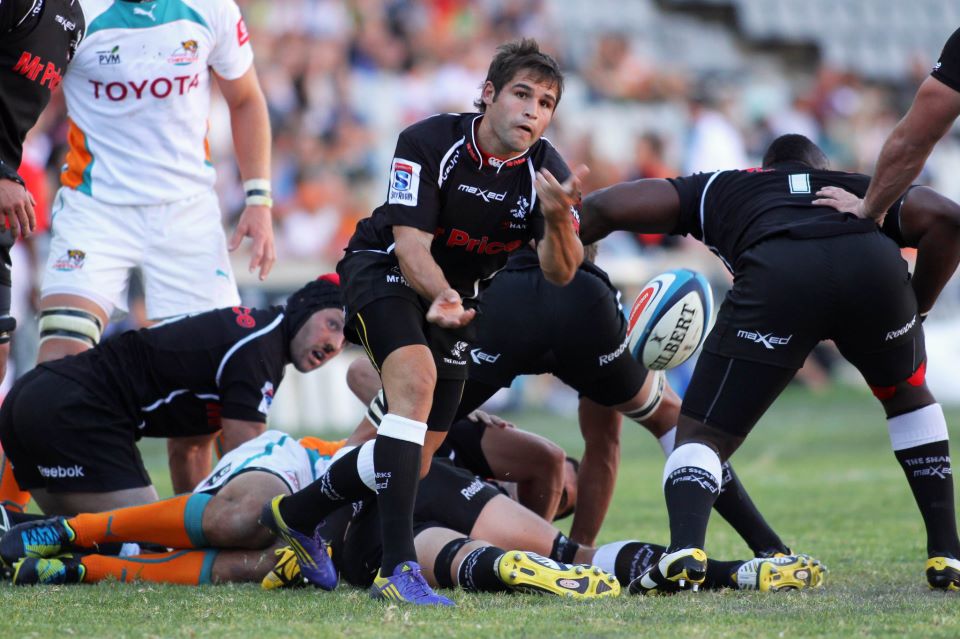 Cobus Reinich gets his pass away against the Toyota Cheetahs in Bloemfontein. Photo by Hannes Naude/ Spektor Fotografie.

It’s the big coastal derby and a replay of last year’s all-South African Vodacom Super Rugby semi-final – this time in Durban – when The Sharks host the DHL Stormers on Saturday afternoon.

The Sharks kicked the 2013 season off with a good win over the Toyota Cheetahs in Bloemfontein, while the DHL Stormers were trumped by the Vodacom Bulls in Pretoria last weekend.

Roughly 24 hours after their defeat to last year’s runners up, the Toyota Cheetahs hopped on a plane and will continue their hellish start to the season in Hamilton this weekend, against the defending champions, the Chiefs, on Saturday morning (SA time).

In the third match featuring South African sides, the Vodacom Bulls will be looking to “take the lead” against the Western Force in Pretoria on Saturday afternoon. The Southern Kings have a bye.

Imagine starting your Vodacom Super Rugby campaign against the top two sides from the previous season in the first two weeks. For the Toyota Cheetahs, this is exactly how their start to 2013 turned out. A tough one, indeed!

Naka Drotské’s team, hoping to improve on their best-ever tour of last year, when they accumulated 11 log points Down under, will be buoyed by their late charge against The Sharks last weekend, when they fought back from 5-26 down to 22-26 with 12 minutes left on the clock. It was a stirring fight-back, but in the end not enough.

The Chiefs kicked off the defence of their Vodacom Super Rugby crown in impressive fashion against the Highlanders in Dunedin last weekend (41-27), a result which would probably instil them as clear favourites on Saturday. Add to this the Toyota Cheetahs’ record in New Zealand of one win and one draw from 16 matches, and you can see why the men from Waikato are the favourites.

But looking back at the results of the six matches between these two sides in the past, an interesting trend emerges.

The Toyota Cheetahs, never shy of throwing the ball around, would like to play with an even more attacking mindset this week, with instinct rather than too much structure.

But the Free Staters’ management are wary of the powerful Chiefs, especially after the defending champions brushed aside the Highlanders with relative ease in Dunedin last weekend.

This might come as a surprise to many, but the Vodacom Bulls and Western Force are even in the head-to-head stakes, with three wins each in their six previous encounters!

Yes, the three-time champions from Pretoria have won three and lost three against the Force, a team that has only once finished in the top half of the standings (they were seventh in 2007).

That includes the shock defeat in 2007 at Loftus Versfeld against the team from Perth, a few months before the Vodacom Bulls lifted the trophy for the very first time.

What makes this even more impressive (if you back the Force) / disturbing (if you support the Bulls), is that the men from Pretoria have won 68% (19 out of 28) of their matches against Australian sides since 2006, when the Force came into being.

Does that make the Force the Vodacom Bulls’ Aussie bogey side? Well, if you compare the Pretorians’ success rate against the other Aussie teams, it certainly does (in some way or form).

Excluding the Rebels and looking at results from 2006 onwards, the Bulls have won all seven their matches against the Waratahs, won four and lost two against the Brumbies and won three and lost four against the Reds – but never at Loftus.

“We are grateful for the win (over the DHL Stormers last weekend), but this week we face a new opponent that will post new challenges,” said Vodacom Bulls coach Frans Ludeke.

“The Western Force has been a difficult opponent in the past and will again ask questions to our all round game and our defence. We have prepared well though and will be looking forward to the challenge.”

Vodacom Bulls captain Pierre Spies said a strong performance at Loftus would be very important as the Pretorians prepare for their tour to Australia and New Zealand.

“We cannot look past this match as it will determine the mind-set we will take onto tour. So this is a very important match for us,” Spies said.

In 2012, the DHL Stormers and The Sharks set the tone in South Africa in Vodacom Super Rugby. The team from Cape Town won the SA conference for the second year running and the men from Durban defied all odds and finished runners up despite a rigorous travel schedule during the Finals Series.

En route to the final, The Sharks beat the DHL Stormers in a tough semi-final at DHL Newlands. But that will count for nothing when these two heavyweights line up at Kings Park on Saturday.

The “score” of nine-all from their previous 18 clashes in Vodacom Super Rugby, indicates an even contest. And with a try-fest probably not on the cards (less than a third of early season matches in Durban yield try-scoring bonus points – eight from 30, to be precise) it will be one of using opportunities.

Sharks coach John Plumtree said his team would have to improve at the breakdown this week, while Jean Deysel’s inclusion at loose forward for Jacques Botes gives them an extra option at lineout time.

“The Stormers hit you hard, so you need to make sure you maintain possession when they do,” said Plumtree. We’ve worked on that in training, it’s a big focus, you need to keep the ball.”

Allister Coetzee, coach of the DHL Stormers, said: “The Sharks will always be a quality side. We said right from the start that it would be a tough start for us this season – playing two games away from home and playing three of the best franchises (first up).

“The Sharks aren’t the favourites for nothing. They are playing well, they are coming off a good win over the Cheetahs, they have a good squad and certain players are already on song.”