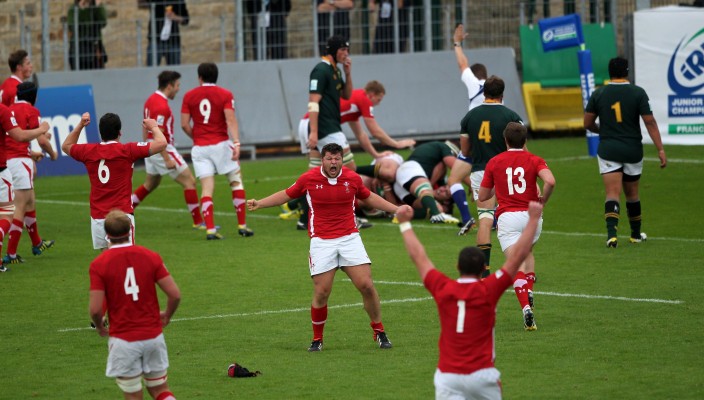 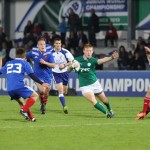 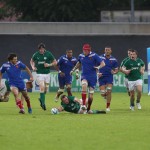 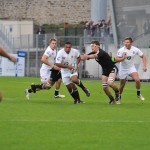 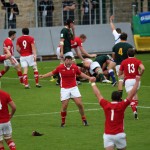 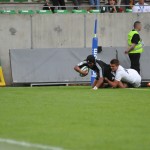 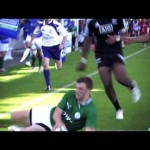 A new name will be written on the IRB Junior World Championship trophy after Wales and England ensured the first all northern hemisphere final by beating defending champions South Africa and four-time winners New Zealand respectively at the Stade de la Rabine in Vannes.

Wales were the more dramatic winners after wing Ashley Evans ran onto a perfectly weighted kick from Sam Davies to touch down in the corner, the fly half holding his nerve to slot the conversion from near the touchline to secure the 18-17 win and end South Africa’s bid to defend the title they won on home soil in 2012.

England then created their own piece of history by beating New Zealand for the first time at age grade level, starting brightly to deserved lead 23-8 before the Baby Blacks came roaring, only to come up short and fail to reach the final for the first time in Junior World Championship history after losing 33-21.

Many pundits had given Wales little chance of beating the South Africans with their bigger forward pack and back three who have impressed throughout the tournament, but the Welsh had other ideas and gradually found their feet after a nervous start to the first semi-final.

Some great defence had stopped flyers Seabelo Senatla and Cheslin Kolbe in their tracks before, in the 15th minute, Wales had their first real attack on the South African line when they came round the front of a lineout only to lose the ball with the try-line insight.

A great break from full back Jordan Williams caused problems for South Africa and his fly half Davies opened the scoring with a 20th minute penalty, adding a second just after the half hour to make it 6-0 with Handrè Pollard having missed his first shot at goal in between.

Just when it looked as though that would be the half-time score Wales switched off for a second and second row Irne Herbst capitalised, taking the lineout ball just on the five-metre line and diving over to give South Africa a 7-6 lead at half-time after Pollard’s conversion.

With Kolbe and Luther Obi looking dangerous on the break, South Africa missed a chance to go further ahead when Pollard failed with another penalty. Wales made them pay with a well-worked try, a flick pass from Sam Davies and cheeky offload from Jordan Williams resulting in a try for captain Ellis Jenkins.

South Africa’s response was swift, scrum half Stefan Ungerer taking a quick tap penalty and finding Pollard, who flung a long pass out to his team-mates stacked out on the right wing, replacement Kwagga Smith getting back to his feet after a desperate ankle tap to dot down his side’s second try to make it 14-11.

Pollard edged the Junior Springboks out to a six-point lead with another penalty five minutes from time but the Welsh refused to give up, fly half Davies putting in a kick on a plate for Ashley Evans to collect and touch down in the right corner, ensuring it was the players in red celebrating at the final whistle.

“We are over the moon, we have made history in our country, and we move on to the final and look for another big win there. It is huge, we had a lot of talk about making history, getting to that semi, and then progressing on as we have done today. No other Welsh team at Under 20 level has done that and we are really proud of ourselves,” said Davies.

They will now face a repeat of the Under 20 Six Nations title decider from earlier this year when England denied Wales the Grand Slam with a 28-15 win in Colwyn Bay, this time for the biggest title that age grade rugby has to offer.

England’s win was wrapped up long before the final whistle thanks to their impressive start, Henry Slade kicking them into a fifth minute lead with the first of what would be seven perfect kicks on the day from the fly half.

New Zealand did hit back quickly with another try from their hooker Epaiahame Faiva, but they would soon surrender the lead when Slade added his second penalty. A great break from captain Jack Clifford saw him offload to fellow back row Matt Hankin to make it 13-6 with 20 minutes gone.

England’s second try was an opportunist one, wing Anthony Watson pouncing on a forced pass from New Zealand centre Jason Emery to race away and score under the posts, giving Slade the easy conversion. Simon Hickey though slotted a penalty to cut the deficit to 20-8 at the break.

New Zealand coach Chris Boyd rang the changes at half-time and although Slade increased the lead with another penalty, the injection had the desired effect and with Jade Te Rure kicking two penalties and converting Emery’s try to cut the deficit to just two points with seven minutes to go.

The momentum was all New Zealand’s but it was England who crucially scored next, replacement front row Tom Smallbone burrowing over the line to ease the pressure, Slade adding the conversion and then a penalty with the last kick of the match.

“It’s unbelievable – having not done well last year, we spoke to the new boys coming up and said we’ve really got to go for it this year. To beat New Zealand on its own is amazing. Never come up against them, I thought they may have sneaked it at the end. But, to get into a final of a JWC in my last year is amazing,” insisted England hooker Luke Cowan-Dickie.

The focus may have been on the semi-finals but there were four other matches just as important for the teams involved as they attempted to secure the best possible standing at Junior World Championship 2013.

France and Argentina both negotiated tricky encounters with Ireland and Australia respectively and will meet in the fifth place play-off on Sunday. Les Bleuets had to survive a last-minute penalty attempt from Rory Scannell to beat Ireland 9-8 in the second match in La Roche-sur-Yon.

Ireland, who had missed out on a place in the semi-finals only on point differential to England, had scored the only try of the match through Ryan Murphy, but three missed kicks from Scannell in comparison to just one from French scrum half Baptiste Serin proved the difference.

The opening match at the Stade Henri Desgrange by contrast saw five tries with Patricio Fernández claiming two of Argentina’s three tries, the fly half contributing 17 points in his side’s 22-15 win over Australia with German Schulz dotting down the other try.

The ninth place semi-finals in Nantes were hotly contested with the four sides knowing that victory would secure their place in the next year’s Junior World Championship in New Zealand, the losers facing a must-win final day battle to avoid relegation to the IRB Junior World Rugby Trophy.

The first match was a typical Pacific Islands battle between Fiji and Samoa, one only settled in the dying minutes as the Samoans came hurtling back from 18-9 down with unconverted tries from second row Tofatuimoana and replacement Fomai Ah Ki.

Fiji must therefore, for the second year in a row, play in the 11th place play-off and battle to retain their Junior World Championship status. Last year they escaped against Italy, and will hope to do the same against USA who are still to score a try at JWC 2013 after losing 39-3 to Scotland.

Centre Mark Bennett delivered a captain’s display for Scotland, scoring 22 points in the victory, including a try in each half at the Stade Pascal Laporte, replacement Scott Steele and full back JJ Kilmartin crossing for the other tries as Scotland made it two wins in a row at JWC 2013.