Wales unchanged for final challenge down under 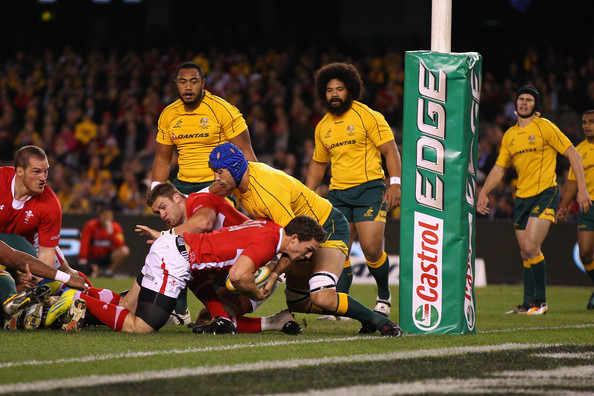 Big winger George North goes over against the Wallabies at the Etihad Stadium in Melbourne, Australia during the second Test on 16 June 2012. Photo by Cameron Spencer /Getty Images.

Wales field an unchanged side for the third Test of their Australian tour at the Allianz Stadium in Sydney on Saturday (kick-off 3.05pm local time).

The same starting XV which led the Wallabies for the majority of the match in Melbourne last weekend – only to be denied by the last-minute penalty which made the home side 25-23 victors – has been handed a repeat chance to notch up Wales’ first victory on Australian soil since 1969.

The replacements’ bench shows one change with Scarlets hooker Ken Owens, who started the first Test two weeks ago in Brisbane, coming in to replace Ospreys front rower Richard Hibbard, who misses out on this occasion.

“We know what we have to do to beat Australia, but there is a difference between knowing how to win and achieving that aim,” said Wales caretaker head coach Rob Howley.

“This Wales team was within around 30 seconds of beating the Wallabies on their home patch for the first time in 43 years, the challenge now is to go one better than that and make sure we are ahead on the scoreboard, not just when the hooter goes, but when the game finishes this weekend.

“The players can take some credit for the way they played for the large part of the match on Saturday, but that will be scant consolation if we don’t come home with a win in this Series.

“We have risen to our highest position (4th) in the IRB World rankings because of our performances so far this season, which can have positive repercussions for the 2015 Rugby World Cup, but now we want to stay there and that means coming away with the spoils on Saturday afternoon.”

Leigh Halfpenny’s 13-point haul last week means he has broken into the top 10 list of all-time points scorers in Welsh international rugby. The Blues full back and wing goes straight in at number eight ahead of 1970s fly half Phil Bennett with 168 points in just 34 internationals.

He now needs 33 points to progress above Gareth Thomas who is in seventh, but is some way off his mentor and kicking coach Neil Jenkins, who heads the list with 1,049 points.