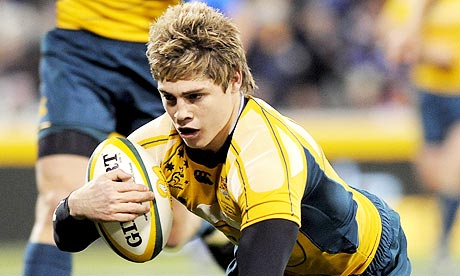 The Wallabies and especially young superstar James O’Connor showed great character when they beat the All Blacks 26-24 in a highly entertaining Bledisloe Cup match in Hong Kong. The match was ultimately won three minutes after the hooter by a try and conversion from O’Connor.

The Wallabies dominated the first 30 minutes of the first half but desperate defense from the All Blacks and poor kicking from the Wallabies meant they didn’t convert all their chances into points.

The All Blacks then took over and dominated the whole match until Dan Carter was subbed by Stephen Donald and Cory Jane made way for Isaia Toeava. Replacements that turned out to be crucial.

Australia struggled to get onto the front foot and they got heavily penalised with serious pressure applied to the scrums from the All Blacks.

Kurtley Beale missed two early penalty conversions before Quade Cooper found a gap in the All Blacks defense and scored the first try of the match in the corner.

Minutes later Adam Ashley-Cooper turned on the magic and broke through the All Blacks line. With brilliant stepping he beat the final defender and dove over under the posts. Giteau only converted Ashley-Cooper’s try before missing a penalty conversion.

The All Blacks was under pressure for most of the first half but weathered the storm and the first time they did put some phases together, they carried it up to the Wallaby line where Jimmy Cowan snatched up a loose ball and dotted it down underneath the posts.

From the restart it was more of the same with the All Blacks stretching the Wallaby defense out wide and it was Kurtley Beale who was found out of position when Cory Jane scored in the corner. Carter converted both tries before slotting a penalty right on the hooter, putting his team 17-12 up at halftime.

The second half started exactly as the first ended for the Wallabies, with a missed penalty conversion and getting stretched on defense by the All Blacks. A few crucial errors from Quade Cooper put the Wallabies against the ropes and it was his slipped tackle on McCaw that opened the gap for Ma’a Nonu’s try halfway through the second half.

The Wallabies refused to lie down and kept the game alive when Drew Mitchell scored in the corner after Kurtley Beale cut through the All Blacks line thanks to a slip in defense from replacement wing Isaia Toeava. James O’Connor took over the kicking duties and slotted a pressure kick from touch.

The All Blacks – leading 24-19 – then simply tried to run down the clock by keeping ball in hand and driving it up.

The turning point came when Stephen Donald missed a relatively easy penalty conversion that would have put it out of reach from Australia. This allowed Australia to launch one final attack

The Wallabies built phase after phase from the restart and stuck to their gameplan by speeding up the game, taking quick taps from ensuing penalties – even with yellow cards pending – and it paid off when James O’Connor powered through two All Black defenders to score the equalizer two minutes after the final hooter.

O’Connor then stepped up and converted his own try with pin-point accuracy to hand Australia a historic and confidence boosting victory.

For Australia James O’Connor, David Pocock and Nathan Sharp had good games while Jimmy Cowan, Ma’a Nonu and the enitre front row excelled for the All Blacks.

Except for the numerous scrum resets this match was a perfect advertisement ahead of next year’s World Cup in New Zealand.