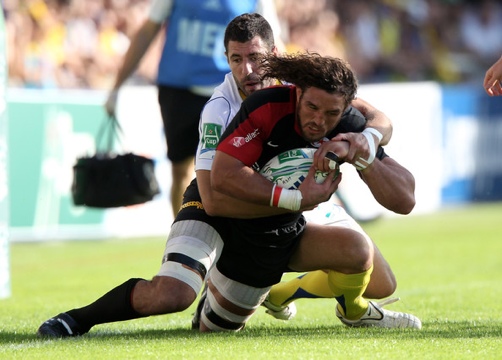 With the key back-to-back games about to get under way, and with the top two clubs in each Pool meeting each other home and away, Saracens return to Wembley Stadium on Saturday for their crunch Heineken Cup Pool 5 clash with the Ospreys determined not to suffer a second defeat at the home of English football.

The reigning English champions went down 25-23 against Leinster last season in front of 45,892 fans and their flanker Jacques Burger insists they cannot afford a repeat.

“I wasn’t really familiar with Wembley before I came over but just talking and listening to the guys here and you knew it’s a special place in this part of the world,” said the Namibian captain who had such a magnificent World Cup.

“However, I have been lucky enough to play there a couple of times for Saracens already and I love it. And, although it is a massive stadium, the atmosphere is both very intense and special.

“We are talking about running out at one of the best stadiums in Europe, if not the world, and you have to be excited about that”.

“The last time we played there in the Heineken Cup we unfortunately lost to Leinster but we are all determined to put that right when we play the Ospreys on Saturday.

“We know the Ospreys will be tough – we saw in the World Cup that Welsh rugby is really on a high and they just seem to be producing all these incredible players – so we know how challenging the next two games are going to be.

“This is a Pool which has the best side in Wales, former finalists Biarritz and ourselves, the champions of England, and then you have Treviso, who as the Ospreys have just found out are so tough to beat at home.

“Nobody should underestimate how tough Treviso are in Italy and I am sure all of the sides probably know this Pool is going to be won and lost on small margins.

“You have to win your home games and get something away from home, and even finishing second is probably not going to be enough to qualify as one of the best runners-up”.

“The Ospreys may be rebuilding but now they have new and young players in the side and that just makes them even more dangerous for us. We have watched videos of them and they are a top team – and have been one of the top teams in the Heineken Cup over the last few years.

“We just have to bring a real edge to our performances in the next two games and we have to do well in this competition this year.

“We let ourselves down last season and weren’t mature enough to handle the demands of this competition. There are no more excuses for this team now, we cannot think about achieving something in the Heineken Cup next year or the season after, it’s all about now.

“We are good enough to really do something in this tournament now and that is the aim and what we have talked about.”