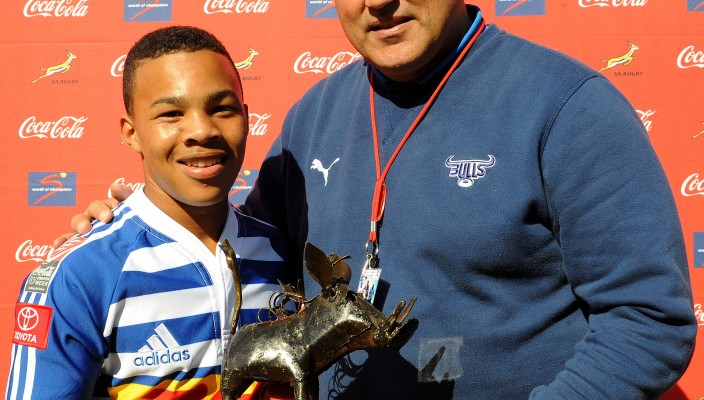 Western Province on Friday finished the Coca-Cola Under-13 Craven Week as the top team at Warmbad Hoȅrskool in Bela-Bela by defeating the Blue Bulls 11-10 to complete a clean-sweep of victories in the 42nd edition of the tournament.

The main game proved to be a typical north-south derby featuring the brute physicality and competitiveness displayed in senior rugby, which marked a fitting end to a fantastic week of rugby.

The unofficial final proved to be a hard-fought contest from the outset, but Western Province had the first say as hooker Matthew Cordy scored a morale-boosting try in the 12th minute, while flyhalf Juan Mostert kicked a penalty to guide the team to an 8-0 lead. Bulls flyhalf Reghardt Roets struck back with a penalty minutes before half time to reduce the deficit to 8-3.

A try by Bulls wing Jason van Nieuwenhuizen, however, handed the Pretoria team a 10-8 lead early in the second half. But their ill-discipline – a factor that cost them point-scoring opportunities throughout the match – came back to haunt them as it handed Province a golden opportunity to kick a penalty in front of the posts.

Mostert made no mistake and edged his team into an 11-10 lead with four minutes to go, and although the Bulls fought back with intent by coming within striking range of scoring a last-minute try, Western Province’s strong defence held them out.

In the other popular matches, Border showed that junior rugby in the province is in a good state as they thumped the Pumas 29-12 to end the Witbank team’s three-match winning streak, while the Golden Lions fought until the final whistle for their 13-12 victory against KwaZulu-Natal.

Border stamped their authority as early as the first minute with Avuyile Mabece scoring the first of the team’s three-first half tries thanks to their effective attack and defence. With their physicality and hard running proving to be their main strengths, they wasted no time building on their 17-7 half time lead and increased their try tally to five for an emphatic win.

The Golden Lions, meanwhile, showed great character to shut out KwaZulu-Natal following their 24-0 defeat against the Blue Bulls on Thursday.  The Johannesburg-based team came out firing as they scored two tries in the first nine minutes. But KwaZulu-Natal hit back strongly with two tries in three minutes to take a 12-10 half-time lead. This set the scene for a gripping second half. The teams lifted the tempo and physicality and tightened up their defence, and the result was a tryless second half. Such was the closely contested half the teams resorted to penalty kicks in an attempt to seal the victory. But while Lions fullback Muzilikazi Manyike held his nerve to slot over his kick for a 13-12 lead with minutes to go, KwaZulu-Natal’s attempt proved unsuccessful, and so did a late attempt to score a try.