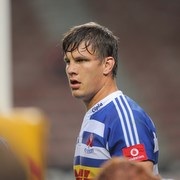 Rhodes received a red card in the 35th minute for the offence, and appeared before a SARU judicial committee in Cape Town on Tuesday.

The judicial officer Peter Ingwersen ruled that although there was no intent by Rhodes to stamp on the side of Ross’ face as he was being pulled down in a tackle at the time and tried to regain his balance, there was sufficient negligence to find the player guilty of transgressing Law 10.4 (b). The law states that a player may not stamp on an opponent.

Given the nature of the incident, it was deemed a lower-entry offence. This, combined with Rhodes’ respectable disciplinary record, resulted in the player being suspended for one match.

Rhodes will therefore miss the team’s clash against GWK Griquas at DHL Newlands on Friday.