What Ireland vs Italy means to the Springboks 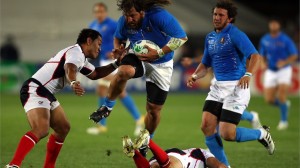 This morning saw Italy take on the USA at Trafalgar Park, Nelson, New Zealand in a vital Pool C match. It was vital for many reasons. The main being, Italy needed a win with a bonus point over the Eagles to keep their Rugby World Cup dreams alive.

The Azzuri won the highly exciting and hard fought game with a bonus point and although the bonus point try came in the form of a penalty try, for the Italians it was mission accomplished. It’s never nice to see penalty tries, but alas, the history books will say it was a bonus point try none the less.

This result has thrown Pool C wide open for three teams and the following scenarios can play out to decide who goes through to the play-offs:

This weekend sees the Wallabies take on the spirited Russians in the final Pool match for both teams. This will be the final match in the 2011 Rugby World Cup for the Russians. The Russians have no chance of qualifying for the knock-out rounds and will be packing their bags on a long flight home after their game against the Wallabies.

The Americans have already started packing their bags.

The Wallabies are currently lying second in Pool C behind the Irish. The Wallabies are virtually assured of beating the Russians with a bonus point. Thus they are guaranteed of making the quarter finals.

Should Australia top the Pool they are most likely to face Wales in the quarter-finals.

Ireland has to win this game to top the log and progress to the play-offs. Should this happen, they will most likely face their Six Nations foe, Wales. A loss is not good enough. If they lose, even with a bonus point for losing within seven points they will crash out of the tournament.

An Irish loss will see the Azzuri go through in second place because they beat the Irish. This is result that will favour the current World Champions.

The Springboks will be playing Samoa on Friday and a win will assure them of topping Pool D, seeing them play the Azzuri in the quarter-finals. If Ireland wins the game against Italy, the men from South Africa will face the Wallabies in the quarters.

Many believe, to be true World Cup Champions you need to beat anybody, which is true. However, to play Samoa, the Wallabies and possibly in the All Blacks in the semi-finals is not an ideal road to the Final. We all know how though these three opponents are.

In an ideal World we would want to see the World Cup semis contested by the Springboks, the Wallabies, All Blacks and either England or France.

This is unfortunately not an ideal World and we would not want to see either the Wallabies or the current World Champions, the Springboks exit the tournament a week early.

The Ireland vs. Italy game will take place on Sunday, 2 October at the Otago Stadium, Dunedin, New Zealand; at 9:30am CAT (South African time). This game happens to be the last Pool game of the 2011 Rugby World Cup.

The Springboks play Samoa on Friday, 30 September at the North Harbour Stadium, North Shore, New Zealand; Kick-off at 9:30am CAT.