Which Super 14 Team will have the best defenders? 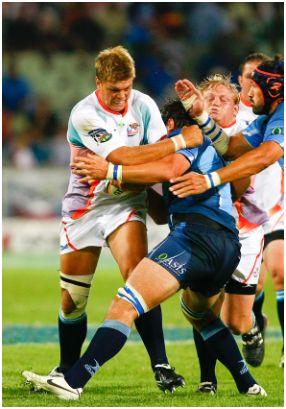 Tackle on Juan Smith captured on camera by Hilton Kotze

I wish to share the comments made on the Cheetahs Blog with our readers on Rugby15:

“Tackling is perhaps that aspect of the game that provides the most discussion amongst spectators. The poor tackles are discussed and criticized, whilst the “big hits” receive much praise!

You will find video clips on “big hits” on websites such as YouTube , but you will seldom find clips on great positional play or great passes – tackles simply fascinate us more and is one of the most important ingredients of this game that we love!

Most professional rugby sides use a “defensive coach” and they spend much time on different tackling systems such as “rush defense”, shift defence etc …Most of us ordinary fans in the stadium don’t know much about these defensive systems – but we can easily spot a poor tackle and a great hand-off!!

This made me think of the above question – How much of tackling is technique and how much is commitment? Why is it that some players are known as good tacklers and are consistently putting in the great hits – whilst others are regarded as poor tacklers? Do we have to look at their technique or do we look at the heart of the player – and look for guts, commitment and pure effort?

Who are the great tacklers of South African rugby? In years gone by players such as Pieter Muller, Henry Honniball, De Wet Barry, Os Du Randt and Butch James have been regarded as top tacklers. We could also add Heinrich Brussow, Juan Smith, Schalk Burger and Bismarck Du Plessis to our good tacklers list! These are the guys known for protecting their channel and who are not easily shrugged off! They take the attacker back in the tackle and don’t simply “ride the tackle”!

We know that effective tackling from first phase is often accepted as a given – and opposition players should seldom score from first phase ball. Tackling becomes much more difficult after many phases of play when players are getting tired, when communication on defense is not effective and players are required to trust the defenders on their inside and outside…This is when the defensive training kicks in and the good teams are separated from the bad teams.

I believe that tackling is very much “a mind thing” and when teams are “switched on”, even the lesser known tacklers are capable of putting their bodies on the line on defense. A recent example was the Scotland v Australia match where Australia dominated possession and stayed in the 22m of Scotland – but simply could not breach the defense of the brave Scots!

To be a winning team more players will have to put their minds to becoming awesome tacklers! Rugby fans adore the great tacklers and it is a sign of a great commitment to the cause and the team.

Hannes Strydom, Springbok lock of the winning 1995 World Cup Team remarked at the funeral of the late Ruben Kruger that he would have gone to war with Ruben. This is a tribute to a great tackler – we need more of these tacklers to have a winning team!!

Who do you regard as our best tacklers?” Which Super 14 Team will claim to have the best defenders?