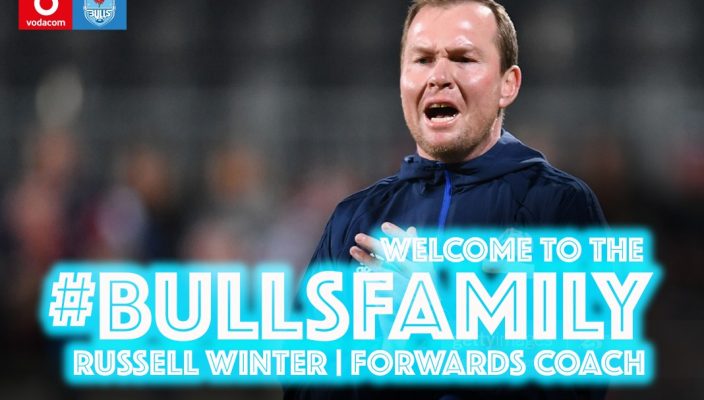 Experienced forwards coach, Russell Winter, will join the Vodacom Bulls as one of the Directors of Rugby, Jake White’s assistant coaches as the #BullsFamily continues to build an experienced and talent laden player and management group.

Winter enjoyed a long and fruitful playing career as the 44-year-old former loose forward represented the Cats and Cell C Sharks in Vodacom Super Rugby and the Xerox Golden Lions in the Currie Cup and Vodacom Cup. His energetic and intelligent playing ability was complimented by his astute leadership as he captained the Cats and Xerox Golden Lions in the Vodacom Cup.

Nationally, he turned out for the Blitzboks at the Hong Kong Sevens and Commonwealth Games in 1998 while he toured Europe with South Africa A in 2001.

He also played for the Newcastle Falcons in the English Premiership before trading his boots for a coaching career.

Winter returned to the Xerox Golden Lions in 2011, where he coached the Vodacom Cup and U21 teams which included silverware in 2013 (Vodacom Cup) before moving to the Cape in 2016 as the forwards coach of the DHL Stormers and DHL Western Province.

Winter shares a remarkable relationship with White that spans over two decades with the latter being a major force in Winter’s decision to attend Jeppe High School for Boys. His move to Loftus Versfeld marks another relationship milestone with the duo sharing similar coaching philosophies.

Winter expressed his delight in joining the Vodacom Bulls and added that he is excited to implement his vision once rugby resumes following its suspension due to the COVID-19 pandemic.

“The Bulls have always been a special team that have enjoyed success at the highest level. I’m excited to be part of this #BullsFamily that shares so many values that I hold dear. I look forward to doing everything in my power to assist in making the Vodacom Bulls a team that not only produces the results on the field, but also goes above and beyond in making our supporters proud.”

White stated that it will be special to have Winter as an assistant coach that sees their relationship come full circle after it begun in the early 1990s.

“I watched Russell grow from strength to strength as a player and continued to watch him grow as a coach. We’ve spoken at length about his role within the #BullsFamily and he is eager to get started with the forwards as soon as we can train again.”