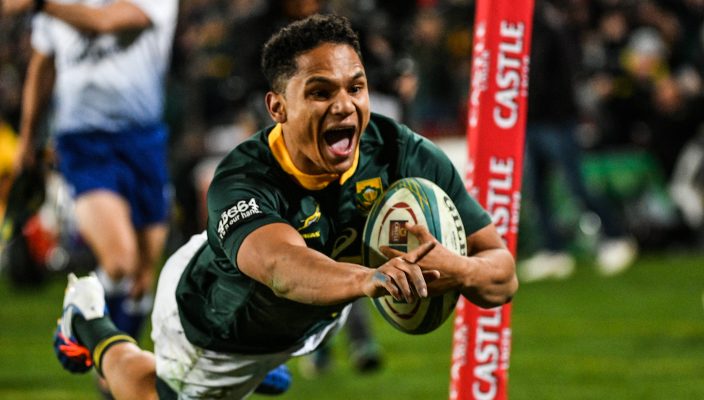 Three countries are represented in the nominees for the World Rugby Breakthrough Player of the Year 2019 award in association with Tudor.

The nominees for this prestigious award, now in its fifth year, are Joe Cokanasiga (England), Herschel Jantjies (South Africa) and Romain Ntamack (France).

To be eligible for this award, players must have played less than one year of senior international rugby, with former internationals Jamie Heaslip, Felipe Contepomi and Rugby World Cup winners Fiao’o Faamausili and Bryan Habana on the panel that selects the shortlist.

The winner will be revealed at the World Rugby Awards, which take place at The Prince Park Tower in Tokyo, Japan, on 3 November.


JOE COKANASIGA (ENGLAND)
The winger announced himself on the international stage with a try on debut against Japan at Twickenham last November and hasn’t looked back with a record of seven tries in his nine tests in the England jersey. He may only have featured once at Rugby World Cup 2019 to date, but the 21-year-old, blessed with both power and pace, ensured he left his mark on the match with a brace of tries against USA in Kobe City.

HERSCHEL JANTJIES (SOUTH AFRICA)
Few people knew anything about the diminutive scrum-half outside of the Stormers camp coming into 2019, but he announced himself to the world in some style, scoring twice on his test debut against Australia in the Rugby Championship in July and then touching down again in the 16-16 draw with New Zealand. The 23-year-old has featured in all but one of South Africa’s tests since, more often than not providing an impact off the bench.

ROMAIN NTAMACK (FRANCE)
A World Rugby U20 Championship winner in 2018, Romain Ntamack is calmness personified on a rugby pitch despite being just 20 and the youngest member of France’s RWC 2019 squad. He made his debut at centre in the Six Nations opener against Wales in February but has now made the fly-half berth his own, starting eight of his 12 tests there, including three in Japan. The son of RWC 1999 runner-up Émile, he has clearly inherited his father’s vision, flair and desire to attack the line.

World Rugby Chairman Sir Bill Beaumont said: “The World Rugby Breakthrough Player of the Year award recognises the most exciting talent to burst onto the international 15s or sevens stage during the year and highlights the ‘ones to watch’.

Former World Rugby Player of the Year and RWC 2007 winner Habana added: “With a number of players bursting onto the international scene over the past year, it was no easy feat choosing only three nominees for the Breakthrough Player of the Year award but the nominees selected have shown their pedigree on the biggest stage and in so doing are fully deserving of their nomination.”