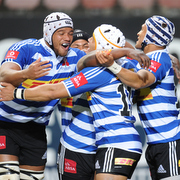 DHL Western Province this weekend reclaimed the top spot on the log in the Absa Currie Cup Premier Division as the competition reached the halfway mark, establishing themselves as one of the favourites in the competition.

But with five rounds of matches remaining and only six points separating the Cape side from the fifth-placed Blue Bulls on the standings, the competition remained wide open.

Western Province delivered a fine performance to defeat the Sharks 25-19 in Cape Town, while the Vodacom Blue Bulls registered a 26-10 victory against the Toyota Free State Cheetahs in Pretoria and the MTN Golden Lions beat GWK Griquas 38-32 in Kimberley.

In Cape Town DHL Western Province produced one of their strongest performances this season to take a one-point lead at the top of the log and build valuable momentum in the series. The team started the match strongly and earned two first-half tries to add to a penalty by flyhalf Kurt Coleman, which allowed them to build up a 15-0 lead.

The second half, however, was much tighter as the Sharks stepped up their game and used their try-scoring chances to cross the chalk three times. Western Province play-maker Gio Aplon, meanwhile, ran in the Western Province’s third try midway through the second half, while penalties at crucial times by the Sharks allowed Coleman to add two more penalties, which secured their victory.

The first half at Loftus Versfeld was hard fought as the Vodacom Blue Bulls and Toyota Free State Cheetahs gave their all on attack and defence. However neither team was able to gain an edge. So close was the half only eight points were scored, with Cheetahs wing Riaan Smit crossing the tryline in the 10th minute to put his team on the board, while the home team had only a penalty by talented flyhalf Handre Pollard to show for their efforts.

But the Cheetahs’ ill-discipline and the forward pressure applied by the Blue Bulls in the second half set up the hosts for an invaluable victory. Pollard slotted over three more penalties while lock Paul Willemse and flank Wiaan Liebenberg reaped the rewards of the strong display up-front, to push the Blue Bulls into the lead. The Cheetahs only second-half points were compliments of a try by flyhalf Elgar Watts.

The clash in Kimberley proved to be a spectacle as the MTN Golden Lions and GWK Griquas scored a combined total of 10 tries, with both sides earning bonus points for their efforts on attack. The home team signalled their intentions early on with centre Jean Stemmet opening up the scoring in the third minute with the team’s first try. But the Lions hit back with two tries in 10 minutes, which bolstered their confidence and set the scene for a thrilling encounter. The rest of the half followed a similar pattern with Griquas scoring and the Lions retaliating, resulting in the home team taking a narrow 19-17 lead.

Three tries by the Lions in the second half to only one by Griquas, however, sealed the victory for the Johannesburg team, who finished the match with an impressive total of six tries.