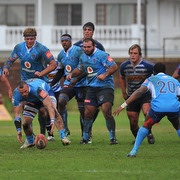 WP takes the lead in U21 Provincial Championship

DHL Western Province were rewarded for their consistency in the Absa Under-21 Provincial Championship this past weekend as they climbed to the top of the log table and gained a valuable four-point lead over the chasing teams.

Victories for Toyota Free State and the Sharks also allowed them to close the gap between themselves and the Vodacom Blue Bulls, resulting in only one point separating the second-placed Pretoria side and fourth-placed Free State.

In an exciting round of matches DHL Western Province thumped the MTN Golden Lions 53-26 at Ellis Park, Toyota Free State defeated the Leopards 40-29 in Bloemfontein and the Sharks registered a narrow 19-15 victory against the Vodacom Blue Bulls in Durban.

At Ellis Park the MTN Golden Lions put up a brave fight against DHL Western Province in the first half as they scored two tries to the visitors’ three. Penalties at crucial times allowed WP flyhalf Dillyn Leyds to nudge his team ahead on the scoreboard, which left the Lions with a lot of work to do in the second half.

Western Province continued their impressive form in the second half though as they ran in another two tries for their bonus point. The Lions held on and also secured their bonus point try before the visitors ran away with the game in the last 10 minutes. Justin Benn and Frederik Nel crossed the tryline to take their try tally for the match to seven. Leyds’ influence was particularly impressive with the player dictating play well and contributing 16 points with the boot.

In Bloemfontein a strong first-half performance set the Toyota Free State up for their fourth victory of the season. So dominant was the Bloemfontein side, they scored four tries in 25 minutes to add to two early penalties by fullback Marco Mason and to take a convincing 30-10 lead at the break.

However, the balance of power shifted in the second half as the Leopards tightened up their defence and stepped up their urgency on attack, which limited the Free State to only 10 points in the half. The Leopards, meanwhile, crossed the chalk three times in the last 23 minutes to secure their bonus point try. Unfortunately for the visitors their efforts were not enough to undo the damage in the first half.

In Durban the Sharks overturned a 15-6 half-time deficit to cause an upset against the Vodacom Blue Bulls. The clash started off tightly with the teams exchanging penalties as they both battled to breach the defence. The Bulls, however, capitalised on two try-scoring chances late in the half, which handed them the lead going into the break.

The Sharks fought back strongly by producing quality performances on attack and defence to take charge of the match. This earned them two tries by Kotaro Matsushima and Stefan Ungerer, while Robert du Preez slotted over his third penalty to seal the victory.