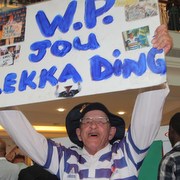 WP U21 extend their lead at the top of the table

The DHL Western Province Under-21 team this past weekend extended their lead at the top of the log in the Absa Under-21 Provincial Championship to nine points to boost their home semifinal hopes as the countdown begins to the final stages of the competition.

The second-placed Vodacom Blue Bulls, however, have a game in hand, which could allow them to reduce the gap. But with the third-placed Sharks and fourth-placed Toyota Free State Cheetahs also having played eight matches, Western Province are in a comfortable position with four matches remaining in the round-robin stages.

In the weekend’s matches, DHL Western Province registered their third 50-point score in eight matches as they thumped the Leopards 54-35 in Potchefstroom, the MTN Golden Lions defeated the The Sharks 39-31 at Ellis Park and Toyota Free State beat Border 45-29 in Bloemfontein.

In Potchefstroom, Western Province were in fantastic form from the outset as they scored two tries in six minutes early in the first half, which demonstrated their attacking prowess. By half time they had secured their bonus point try, indicating that they were on track for a big win. Leopards flyhalf Warren Gilbert, however, kept his team in the match as he slotted over two penalties and a drop goal to add to a try by Marnus Tack to secure 16 points in the first half.

A superior try tally combined with a good kicking day for MTN Golden Lions fullback Marais Schmidt guided the Johannesburg team to victory against The Sharks at Ellis Park. The first half was hard-fought despite the Lions scoring three tries to the Sharks’ two, as Sharks flyhalf Robert du Preez kicked two penalties to trail the home team 19-18 at the break.

The Lions built on their strong display in the second half as they scored another two tries to only one by the Sharks, while Schmidt slotted over two penalties to cancel out an extra two by Du Preez. This was sufficient to seal the victory for the Lions.

Toyota Free State, meanwhile, bounced back from a 15-14 deficit in the first half against Border to claim their fifth victory of the season and remain in fourth position on the log. Both teams dotted down tries in a close first half, but an additional penalty by Border handed them an edge on the scoreboard.

Three tries in 16 minutes for the Free State after the break pushed them into a comfortable lead. Border fought back hard and tightened up their defence, resulting in a tense final quarter, in which the teams each scored another two tries. The defeat for Border marked their eighth in as many matches, although they earned a bonus point for scoring four tries.