WRU helps children get active through Rugby for Life 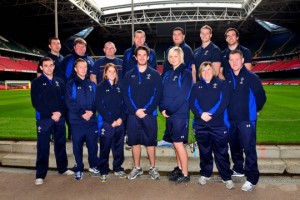 A ground breaking initiative aimed at encouraging more children and adults to reap the benefits of getting involved with rugby as a healthy lifestyle hobby which promotes the importance of teamwork has been unveiled by the WRU.

The union has recruited fourteen RugbyParticipation Officers (PO’s) to newly created roles in grassroots rugby across Wales to spearhead the scheme.

The new officers are contracted until 2014, and are based in rugby strongholds across the East and West of South Wales in accordance with Regional rugby demarcations, with two full time positions also delegated to North Wales.

Two officers will cover the Cardiff region, whilst there are two new members of staff looking after the Newport, Gwent and Caerphilly areas, a further six are dotted along the M4 corridor taking in Swansea, Bridgend, Neath/Port Talbot, Rhondda/Merthyr and Pontypridd & Cynon Valley, with two based in Carmarthenshire and Pembrokeshire and two spread across the East and West of North Wales.

The new ‘army’ of rugby ambassadors will go out into their communities with the particular aim of enhancing participation by children, adults and girls and will target three key areas:

Promote opportunities to play rugby in primary schools.
Deliver touch rugby programmes in secondary schools.
Develop a new summer adult ‘tough rugby’ programme and a commercially viable ‘pay to play’ series.
The new team will head into the schools and communities across Wales to explain how rugby can help its participants, both young and old, and enhance their involvement in the game.

The WRU officers will focus on getting children, young people and adults into the habit of being participants in activities which will improve their health.

The project has been launched in alignment with £400,000 of Sport Wales funding over the next three years and involves activity in every region of the nation.

The initiative is part of the WRU strategy to increase family participation in rugby at grassroots level to protect the future of the game in Wales.

It has been closely aligned to Welsh Government policy which is aimed at encouraging the nation to get into the habit of being active.

The idea is for physical activity to remain a key element of their lifestyle as they grow into adulthood.

In the initial stages the focus of the PO’s will be on physical activity with rugby becoming a more prominent factor as the children develop an interest in sport.

The officers will operate within the primary and secondary school systems working closely with local authority teaching staff.

Some of these activities should offer commercial opportunities and this will form the basis of a plan to continue the funding of the project after the initial three year funded period.

The Group Chief Executive of the WRU, Roger Lewis, said: “The WRU is leading the way forward in creating and supporting children and families with positive rugby based learning programmes. Our desire is to work in partnership with like minded people such as Sport Wales to create a Welsh unity of purpose is a strong message to our nation.

“This is all about teamwork. In this environment there is no room for critics in the grandstand. We have got to get out there and do something positive.

“The WRU is committed to a spirit of cooperation and partnership to ensure we develop and prosper in these difficult times. We are putting considerable real money and effort behind this.”

The WRU National Development Manager, Jason Lewis, said: “We believe offering alternative forms of the game will encourage more of the target groups to engage with rugby.

“This new army of participation officers are an integral part of the WRU’s planning for the future and each of them carries a great weight of responsibility on their shoulders as we aim to not only maintain but significantly increase participation levels in our national sport in the years to come.

“Wales punches above its weight in the national game when you compare the population of our small country, and the participation levels within it, to our bigger cousins not only in England and France, but virtually throughout the top tier nations.

“But we cannot afford to rest on our laurels and, although rugby is our national sport, we are nowhere near the saturation levels we could be.

“Offering alternative forms of the game will, we believe, encourage more of these target groups to engage with rugby. The WRU has some bold targets to achieve in terms of growth over the next four years and we are looking for a 25% increase in participation numbers in that time.

“In creating the new roles, existing staff have been allowed to focus more deeply on more traditional forms of the game. Player Development Officers can now work more closely with secondary schools, clubs and the WRU’s own player development pathway from U12 to U16.”

Professor Laura McAllister, Chair of Sport Wales, added: “The WRU should be commended for looking at alternative forms of the game to appeal to larger numbers of the population.

“If we are to achieve our ambition of getting every child hooked on sport for life, we need to do things differently. We can’t have more of the same.

“The project aims to get an additional 17,000 children regularly playing rugby by 2014/15 which would be a great outcome.

“It’s also paramount that the sports sector in Wales looks to measure itself against other nations if we are to realise a step change – just as the WRU is looking to New Zealand in terms of grassroots participation.”