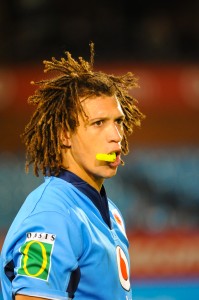 Zane Kirchner on his way to NZ (Photo: Rugby15/Bruce Taylor

Blue Bulls fullback Zane Kirchner has been called into the Springbok Rugby World Cup squad as a replacement for the injured Frans Steyn. Kirchner, 27, will join the squad in Wellington on Tuesday morning in preparation for Sunday’s quarter-final.

Steyn injured his left shoulder in the final few minutes of the Springboks’ 13-5 victory over Samoa in Auckland on Friday and will return to South Africa for surgery.

“I am bitterly disappointed,” said Steyn. “I don’t know how the injury happened – it was at a ruck when I was cleaning someone out late in the game. I was enjoying our campaign and the tournament, and to have it ended like this is very disappointing.

“I’d just like to wish the squad all the best for the rest of the tournament.”

Steyn scored tries in each of the Springboks’ first three matches in the tournament as well as adding two long-range penalties for a haul of 21 points in his second Rugby World Cup. Four years ago he became the youngest player to win a Rugby World Cup winners’ medal as a 20-year-old in South Africa’s victory in France.

Kirchner has won 14 Springboks caps – the last of them coming against England in November. He was a member of the Springboks’ Rugby World Cup preliminary squad but missed out on initial selection for the Tri-Nations tournament because of injury. He has since returned to fitness and to Currie Cup action with the Blue Bulls.