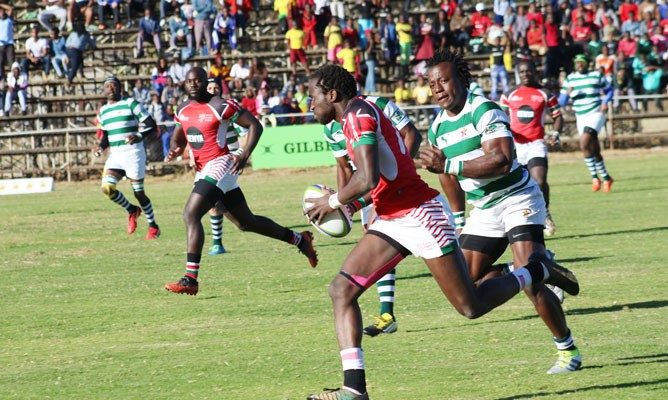 Leading 24-15 at half time, the Simbas piled on 37 unanswered second half points to crush hosts Zimbabwe 61-15 in Rugby Africa 1A action at the Police Grounds in Harare on Saturday 9 July 2016.
The Simbas were rampant against the Sables whose last line of defense,fullback Tangai Nemadire and wing Manasah Sita were caught napping by the alert Tony Onyango who grounded for visitors four minutes, Darwin Mukidza converting for the 7-0 score.
A Lenience Tambwera penalty conversion two minutes later brought Zimbabwe to 7-3 but David Ambunya took the Simbas 12-3 up, touching down after incessant pressure and effective ball distribution from the Kenyan backs.
Boyd Rouse responded with a converted try for the Sables in the 27th minute. Further converted tries from Ambunya and Dennis Muhanji put the Simbas 24-10 up. Zimbabwe would land an unconverted try just before the interval.
Mukidza extended the visitors lead with a penalty after the restart and when Tony Owuor scored for Kenya, there was seemingly no response from the hosts, the score 32-15 at this point.
Muhanji landed his brace, the unconverted try putting the Simbas 37-15 up before converted tries from second half substitute Dan Sikuta and scrum half Edwin Achayo saw the Simbas lead 51-15.
Further tries from Sikuta and Max Adaka rounded off the result, Kenya’s biggest ever win over Zimbabwe and their first win in Harare since posting a 23-18 result over the Sables on 17 July 2010.
It was also the Simba’s biggest away win since registering an 80-9 win over Bostwana in Gaberone on 2 August 2003.
Speaking after the match, Assistant Coach Dominique Habimana said, ” We were out for the win, the team smelt victory and got it in the end after a great all round team performance.”
They head to Windhoek on Sunday ahead of their upcoming fixture against Namibia on Saturday 16 July.