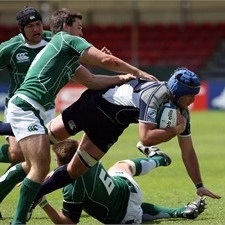 Former Scotland Under 20 flanker Andrew Rose is now back in his native Zimbabwe, ready for national duty. Photo: Getty
By Enock Muchinjo

For the past three years, all the talk in Zimbabwean rugby has centred around the dream to go to the Rugby World Cup for the first time in 22 years. Zimbabwe’s Sables last played in the World Cup back in 1991 in a tournament staged in five European counties.

But a talent drain, coupled with dwindling numbers among the country’s Rugby playing population in the late 1990s took its toll on the national side and the game in general. The decline of the country’s economy followed and had devastating socio-economic effects on Zimbabwean life, and Rugby was one of the hardest hit.

But a period of stability in the country, ushered in by a power-sharing government in 2008, brought renewed hope to a country on its knees, and Rugby began to find its feet again.

Dedicated administrator Themba Sibanda, a youthful business executive from Harare, initially drew up a five-year plan which culminated in the quest to qualify for England 2015. The dream is now being steered by ex-Zimbabwean schools and club coach John Falkenberg, who replaced Sibanda as Zimbabwe Rugby Union (ZRU) President in January 2012.

Although the ZRU still remain largely an amateur Union, Falkenberg has worked around the clock to professionalise key arms of the organisation’s administration, identifying this as the first stage of the qualification bid.

Falkenberg – who coached former Springbok flyer Tonderai Chavhanga at Under 16 level – believes that qualification for RWC 2015 will unlock opportunities for the game in the country.

“That’s the aim. We know the task ahead of us. If we qualify, we need a budget of $5 million,” says Falkenberg.

“ZRU will do everything in its power to make sure the team qualifies for the World Cup. We will use every resource we possibly can and we have the support of the IRB and CAR (Confederation Africaine de Rugby). People are supportive of Zim Rugby but you have to appreciate we operate in tough economic conditions.”

One of Falkenberg’s two executive vice-presidents is the hardworking and dedicated Colleen De Jonge, whose son Raymond won a single Test cap when Zimbabwe won the CAR title in 2012. She is just the second woman in Zimbabwean rugby history to hold such a position.

“As far as corporate governance is concerned, we are guided by IRB structures,” De Jonge says. “There are key performance indicators. We send a report every three months to IRB. They have always complimented us and are happy with what we are doing.”

Dawson has overseen a recovery

Zimbabwe’s current coach is Brendan Dawson, a former captain of the side. A fiery character, the 49-year-old from Bulawayo has earned more than 100 caps for the Sables, the most experienced player in Zimbabwean Rugby history.

A combative loose forward in his prime, Dawson was a member of the last Zimbabwe team to play in Rugby World Cup, scoring a try in the 55-11 loss to Ireland in 1991.

Known for his unadulterated display of exuberant passion when it comes to the subject of Rugby in his homeland, Dawson has been the longest-serving coach in Sables history, having taken over in the “dark ages” back in 2007 when Zimbabwe had sunk to their lowest ebb in decades.

Under him, Zimbabwe have recovered to win the three-nation Victoria Cup in 2011 following a home-and-away clean-sweep over Kenya and Uganda before going on to claim the African title in Tunisia in 2012.

In an effort to expand the player pool and identify a core team ahead of next year’s final World Cup qualification tournament in Madagascar (also involving Namibia, Kenya and the hosts), Zimbabwe have in the past two years called-up some of the country’s exiled players for regional tournaments.

Lure of RWC was enough for Rose

Some of the European-based players include Blackheath centre Sean Moan and Jersey number eight Kingsley Lang, who both impressed in the recent Tri-Nations tournament in Namibia against the hosts and Kenya.

One of the most prominent returnees is flanker Andrew Rose, who was appointed stand-in captain for Zimbabwe in the 29-14 win over Kenya in Windhoek after skipper Daniel Hondo suffered a concussion in the opening 35-26 defeat to the Namibians.

Rose, who also captains Scottish Premiership side Boroughmuir, had a rugged upbringing in the small Zimbabwean farming town of Macheke and captained the county at Under 19 level but he would later follow his Scottish connections to earn Scotland Under 20 caps.

But the lure of the World Cup, and not having represented Scotland at senior level, saw Rose return to the continent to represent the country of his birth.

Boroughmuir Rugby’s chairman, the former Scotland back row and SRU chief executive, Bill Watson, was delighted to support Rose’s request to leave the club temporarily for a shot at international Rugby.

Ndlovu switched from soccer to Rugby

Watson said: “When Andy was first included in this series of games for Zimbabwe, everyone at Boroughmuir Rugby was incredibly proud of him. For him to be named captain is just reward for the hard work that he puts in. This is a massive achievement for him personally.”

While Zimbabwe have lately turned to the foreign-based players in pursuit of that cutting edge, they have also tapped into the grassroots, with players from the previously overlooked areas now being considered as some of the Sables’ key players in the RWC quest.

Talented loose forward Njabulo Ndlovu grew up playing soccer with his friends in the dusty streets of Mbare, one of Harare’s oldest and poorest townships. He did not play Rugby until his second year of senior school, when he was identified by renowned development coach Victor Pekane, who enrolled him in his fledgling Mbare Academy in the suburb.

Ndlovu developed fast enough to be awarded a full Rugby scholarship at the famed Prince Edward Boys High, where he continued to blossom as a complete Rugby player.

Now on another bursary at the University of Western Cape in South Africa, the 25-year-old Ndlovu has represented Zimbabwe on the IRB World Sevens Series circuit. At Fifteens level, he is also one of Brendan Dawson’s trump cards going into next year’s crucial tournament in Madagascar.

Nechironga was poached from basketball

Another development player in the Zimbabwe team is Gardner Nechironga, who was poached from basketball while playing for his high school in Bulawayo, where he was born and bred. The pacey wing has been the Sables’ leading try-scorer in recent seasons, and has continued to shine since re-joining the Zimbabwean club scene following a stint in Germany.

Yet another exciting development in Zimbabwean Rugby, seen as a coup by many in the fraternity, is the recent appointment of former Bristol coach Liam Middleton as the ZRU’s Director of Rugby.

Having cut his coaching teeth in the UK for more than 10 years, Harare-born Middleton has been settled back home, with assistance from the IRB, to take up the new post in Zimbabwean rugby.

In addition to being in charge of the Union’s development arm, Middleton, who has also previously coached Zimbabwe’s Sevens team, will have to juggle his responsibility by joining the Sables’ coaching bench as technical advisor. Middleton’s first assignment with the Sables was during the Windhoek tri-series, and the well-respected 36-year-old coach was impressed with what he saw.

“I think we have managed to get a side that can compete, and we have a real chance of qualification next year,” he says.

“There was vast improvement from the training camp in Bulawayo and the week in Namibia. If we continue to improve in the technical and tactical aspect, we’ve got a genuine chance.”