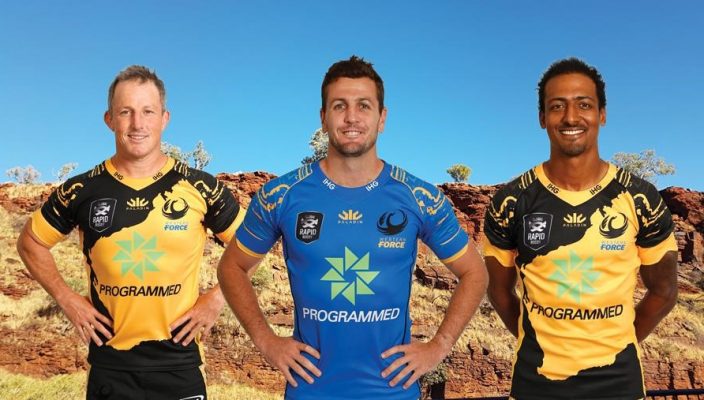 The unveiling of imaginative new home and away jerseys was the feature of today’s official launch of the Western Force’s Global Rapid Rugby Season One campaign.

Branded iron formations of the Pilbara – truly unique to WA – provided the inspiration for both jerseys. The colours and textures of these ancient formations are central to a design developed in collaboration with Paladin Sports, a long term supporter of rugby in WA.

The striking new blue and gold home jersey was seen for the first time today, along with an away strip that proudly displays the expansive WA coastline. A map of Western Australia dominates the Force’s gold and black away strip and will ensure the opposition cannot escape the passion of the players who represent their state and their country with pride.

Force captain Ian Prior and a handful of other players had an important role in the designs.

“Our jerseys are deliberately Western Australian because our squad knows it is privileged to represent this state and its proud heritage in this exciting new competition,” Prior said at the season launch.

“WA has an amazing mining heritage and is the largest exporter of iron ore in the world, so it made perfect sense that the team identified itself with such a strong and recognisable commodity.

“The mining industry is one of the largest employment sectors in WA and many members of the rugby community are involved in the industry in some capacity. Hence, the jerseys reflect the enduring qualities of iron ore and the resolve that resonates with the history of the Force, the state of Western Australian and our loyal fans,” Prior said.

Western Force Head of Rugby and former captain, Matt Hodgson, is the Force’s longest-serving player and was thrilled to learn that the team was keenly promoting its identity this year.

“This is the start of a new era in professional rugby in WA and to be able to show that we represent the West is important to both players and the fans.

With the highest number of local players in the squad since the beginning, the jersey not only represents the state we represent but also shows a pathway for all kids playing rugby in Western Australia,” Hodgson said.

The iron ore and mining based elements of the home and away strips have obvious synergies with several Western Force sponsors and partners, including Programmed, Fortescue and NRW Holdings.

“The involvement of the local mining sector, along with other WA businesses, is a very positive sign and says a lot about the future of the competition and the state,” Hodgson said.

Programmed has extended its Principal Partnership with the Western Force for a third year.

A leading provider of staffing and maintenance services with more than 20,000 employees across Australia and New Zealand, Programmed will display its logo on the front of the Force playing strip.

An extended partnership will also see Programmed support the local community by providing its unequalled expertise managing the employment of all game day staff required for a range of services.

“Like the sport of rugby itself, Programmed has a strong heritage in Western Australia and we’re proud to stand beside Western Force because we share a passion and commitment to building strong and sustainable communities,” Mr Nic Fairbank, CEO Programmed Skilled Workforce, said.

“It is our third year sponsoring the Western Force and we are thrilled to be a part of the evolution of Global Rapid Rugby, starting with a showcase series to now a home-and-away season.

“We are confident that the Force will thrive in WA, nationally and also on the international stage and look forward to a great season.” Mr Fairbank said.

Global Rapid Rugby’s inaugural home and away season will feature six teams, 10 rounds, and 31 games, including a one-off grand final and a total prize pool of AU$1 Million. The competition aims to grow the game of rugby in the APAC region and features innovative new laws that ensure more ball-in-play and reward attacking rugby.

The Force will kick off its campaign against the Malaysia-based Valke in Perth at 6.15pm Saturday, March 14.