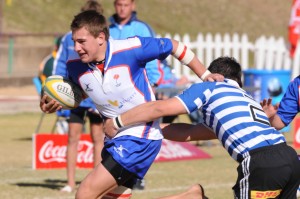 The Limpopo Blue Bulls secured a closely fought 8-6 victory over Western Province in the final match of the Coca-Cola Under-13 Craven Week played at Affies in Pretoria on Friday.

Utility back Schalk Erasmus kicked a last minute 40-metre penalty to steer the Limpopo Blue Bulls to their third victory of the tournament after they secured wins over the Blue Bulls (19-17), Free State (27-7) and the South Western Districts (28-0) earlier this week.

The Limpopo Blue Bulls scored the only try of the match which was scored in the second half when lock Albertus van Deventer crashed his way over the try line and hand his team the lead after Western Province’s Michael Visser opened the scoring with a penalty kick in the first half.

WP U13 flyhalf Manuel Rass then handed the Cape team the lead with four minutes remaining in the game with his first penalty of the match. However Erasmus had the final say after slotting his long range kick to hand the Limpopo Blue Bulls their fourth victory at the 2011 Coca-Cola Under-13 Craven Week.

The Cape Under-18 team rounded off the week with a win over the Golden Lions with two other victories which were earned against Eastern Province (28-25) and a convincing 38-0 performance against the Blue Bulls. The Golden Lions also enjoyed success at the Under-18 Academy Week and notched up two wins against the South Western Districts (34-24) and the Griffons (45-20).

“I am pleased to confirm that we are extremely happy with the start of the annual Coca-Cola Youth Weeks,” said Lindsay Mould, Chairperson of the South African Rugby Schools Association.

“The rugby at both tournaments – the Coca-Cola Under-13 Craven Week and the Under-18 Academy Week – has been both entertaining as well as pleasing to watch. There’s also been some good attendances at both Affies and at the University of Johannesburg venues, so there’s great interest at the moment.

“I can also mention that I am extremely happy with the standard of refereeing at both weeks. If you look at some of the scorers, you’ll see they’ve allowed the players to play some exciting rugby within the boundaries of the laws.”

“There are some exciting plans underway at the South African Rugby Union in terms of arranging an international match for the SA Schools team, as well as the SA Academy team, more information of this will be provided at the Coca-Cola Under-18 Craven Week,” said SARU Manager Playing the Game Mervin Green.

“We’ve met with representatives of the South African Schools Rugby Association here in Pretoria to share with them our plans, and there’s general optimism from all sides in terms of our plans for both the SA Schools and SA Academy teams which are going to be selected at the conclusion of the Coca-Cola Under-18 Craven Week.”