Must have book for all Rugby fans: “Stories from the Touchline” by Springbok legend Theuns Stofberg

Mar 25 • General News, International, South Africa, Springboks • 3716 Views • No Comments on Must have book for all Rugby fans: “Stories from the Touchline” by Springbok legend Theuns Stofberg 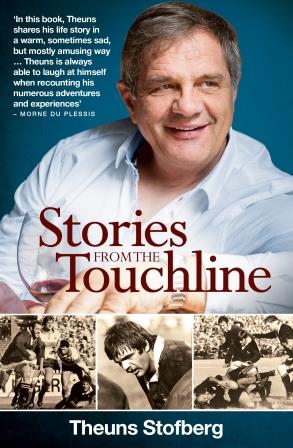 New from Zebra Press, Stories from the Touchline by Theuns Stofberg:

A collection of humorous, touching and uplifting stories about life, rugby and everything else by one of South Africa’s true rugby legends …

Theuns Stofberg’s illustrious rugby career spanned from 1976 to 1985, and he is commonly considered one of the all-time Springbok greats. As the 36th captain of the Springboks, one of only 56 players to be given this honour, he was tough and uncompromising on the field but a true gentleman and great raconteur off it, which he proves with the anecdotes collected in this book.

In Stories from the Touchline, he takes the reader behind the scenes, from his childhood days as a schoolboy rugby player to the 1981 flour-bomb tour of New Zealand and winning the Currie Cup for three different provinces – a feat unmatched to this day. He also writes about what it was like playing with legends such as Morné du Plessis, Gerrie Germishuys, Schalk Burger Sr and Gysie Pienaar, marvels at the fans’ odd and often colourful behaviour, and affords readers a fascinating glimpse into the amateur days of rugby in South Africa. He also shares his personal struggles with a speech impediment and ill health, and coping with family tragedy, in his own inimitable way. By turns deeply personal, amusing and nostalgic, this book will be treasured by each and every South African rugby fan.

Theuns Stofberg is the only player in the history of South African rugby who won the Currie Cup for three different provinces: Orange Free State, Northern Transvaal and Western Province. In the 10 years that he played senior rugby, his side always advanced to the Currie Cup final, winning six and drawing one. He became a Springbok at the age of only 21, replacing the legendary Jan Ellis in the second Test against Andy Leslie’s All Blacks in 1976. He scored six tries in his 21 Test matches and captained four international matches, against New Zealand, England and South America. He and his wife Martie live on Rouana, a small wine farm among the vineyards of Stellenbosch.

We will be giving 5 copies of this must have book to our  followers.