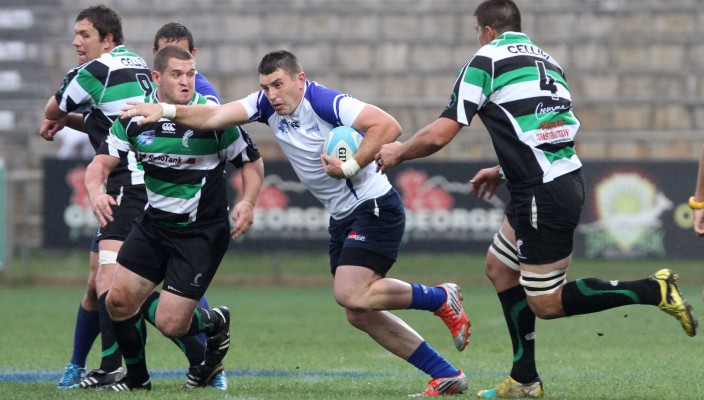 THE first of a group of four outstanding performers from this year’s Cell C Community Cup will depart for the United Kingdom later this week on an international exchange programme designed to reward their efforts and develop their skills, the South African Rugby Union confirmed on Monday.

Wing Michael Nienaber, who helped his team, Rustenburg Impala, to their maiden Community Cup title in George on Easter Monday, will depart for the west of England on Friday to spend a month with English Premiership club Gloucester.

Nienaber, 25, an electrician by trade who scored four tries en route to being unanimously named Community Cup Player of the Tournament, will be put through his paces at the club’s renowned Academy while also training alongside the likes of British & Irish Lions Billy Twelvetrees and James Hook.

Boland Cavaliers flanker Chaney Willemse, 21, whose scintillating performances helped Wellington-based Roses United to a sixth-placed finish in George, was named Young Player of the Tournament and will depart for Scotland next month, where he will spend three months playing for Premiership club Selkirk.

Also headed for the UK next month are the outstanding managerial duo of coach Alistair Alexander and team manager Steve Prinsloo, who will spend 10 days in the north-west of England with Premiership club Sale Sharks.

The exchange programme is endorsed by Sport & Recreation South Africa (SRSA) and UK Sport, and is a joint initiative between SARU, the British High Commission, Wales Rugby Union, various clubs in the UK, and RDJ Sports Development, who facilitate the programme for SARU.

Alexander and Prinsloo will shadow Sale’s coaching and management teams throughout their preparations for crunch Premiership fixtures against Leicester Tigers and London Irish on 9 and 15 November respectively.

“This is a once-in-a-lifetime opportunity for our club players, coaches and officials to develop not only in a rugby sense but also as individuals,” said SARU CEO, Jurie Roux. “The Cell C Community Cup has already begun to put club rugby back on the map and this initiative takes it a step further by rewarding individuals who caught our eye and who we believe have the potential to go further in the sport. It’s also just reward for the hours of hard work – often unseen but not unnoticed by us – put in by these passionate rugby men.

“Michael, Chaney, Alistair and Steve are pioneers and hopefully the first of many to get to experience a different rugby culture as a reward for their dedication to their clubs. They are ambassadors for South Africa and SARU and we hope they are able to return home to plough back what they have learnt in their respective communities.”