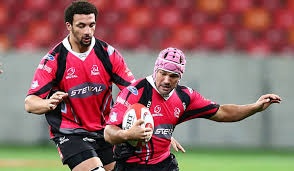 The importance of securing bonus point victories will become especially significant for the top teams in the Absa Currie Cup First Division in the next few weeks as the battle for semifinal places and home semifinals becomes tighter.

With five rounds to go the Pumas have an 11 point lead at the top of the table, which should place them in a comfortable position to secure a home semifinal. However, only four points separate the second-placed Leopards and fifth-placed Regent Boland Cavaliers, meaning bonus points will be vital for these teams to gain an edge as the round-robin stages nears a close.

In Friday’s matches the Border Bulldogs host the Regent Boland Cavaliers in East London, the Leopards meet the EP Kings in Potchefstroom and the SWD Eagles take on the Valke in George. In the only match on Saturday the Down Touch Griffons host the Steval Pumas in Welkom.

The clash in Potchefstroom is expected to be a tight and physical affair given the high stakes for both sides. The Leopards emerged victorious in their match-up earlier in the competition, but the recent return of the Southern Kings Super Rugby players could result in a better performance by the EP Kings. The forward battle should be epic, and given how closely matched the teams are on form after a string of competitive performances, the battle of boot between flyhalves George Whitehead and Adriaan Engelbrecht could be decisive.

The SWD Eagles will certainly look to take advantage of their favourable log position and form when they go up against the Valke, who have only one victory to show for their efforts so far in the competition. With the Eagles boasting six bonus points for tries in nine matches, the Valke, who have leaked 51 tries in their nine matches, will have to improve their substandard defence to keep alive hopes of a shock victory.

The Regent Boland Cavaliers are also expected to have an edge over the Border Bulldogs in East London, although they may have to work hard for a victory as the Bulldogs have put up a series of brave fights. Such has been the competitiveness of the East London team they have racked up five bonus points for losing by seven points or less. That said, with the likes of Cavaliers backs Braam Gerber, Brendon April and Eric Zana at bay, the Bulldogs will have to remain disciplined and show a high level of commitment on defence to create an upset.

In Welkom the Steval Pumas will enter their clash against the Down Touch Griffons as overwhelming favourites on form following their consistently superb performances. With the Griffons having won only two of their matches, the Pumas will also target this match for a possible bonus-point win in an attempt to secure the top spot on the log in a few weeks. The Griffons’ defence, in particular, will have to be rock solid to prevent the Pumas from securing another big win, while they will have to be disciplined as JC Roos’ accurate boot has the ability to keep the scoreboard ticking. But with nothing left to lose and a few solid performances behind them this season, the Griffons will do their best to create headaches for the Pumas.